Beginning in the late 1990’s Debbie’s paintings gained national recognition with appearances on CNN, ESPN, Channel 7 (Fox – Miami) and the Sunshine Network (Cable – Florida). Numerous articles covering her accomplishments appeared in USA Today, The Miami Herald, and The Fort Lauderdale Sun-Sentinel. Her sports art has appeared on covers of major publications such as ‘The Sports Collectible Digest’ and ‘Dan’s Papers’ (Weekly publication, New York City and The Hampton’s). Her work was selected for Official Posters for the ‘Dressage on The First Coast FEI Great American/USDF Region 3 Championships’ (Jacksonville, Florida 2005), ‘The Aventura Festival of the Arts’ (Aventura, Florida 1994), and a Limited Edition lithograph of Scott Mellanby distributed by the Florida Panthers Hockey Club. She was the Artist in Residence at Calder Race Course and Casino in Miami, Florida from 2003 – 2011. She painted during the World Equestrian Games in Lexington Kentucky 2010 and did the artwork on an award winning western romance book series “Threads West” series for Reid Lance Rosenthal. Artist of the month at the National Museum of Sports Art in Indiana for the month of May 2013 and was one of the artist chosen for the the National Museum of Polo and Hall of Fame 2014. Finalist for Showtime’s Big Boxing Mayhem: “Mayweather vs Maidana 2” World Title Fight Artist, September 2014.

To view Debbie’s work click here.  If you would like to purchase her art you can shop here. 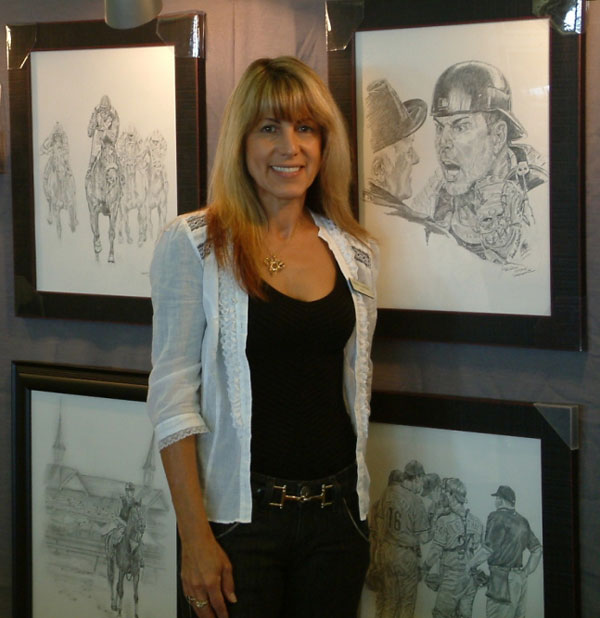